I went through a strange period after the birth of my daughter. It was a difficult and ultimately dangerous birth, and I didn’t realise until afterwards just how close I had come to the unthinkable.

On some level, though, I did know…but the psyche builds protective force shields against such knowledge sometimes. All I knew was that I felt oddly disconnected from my life – as if I were floating above myself, watching a doppelganger taking my place. I lost weight – I was thinner than I’d ever been. And despite longing to be a size 8 my whole adult life, I didn’t like the way it felt. I felt insubstantial, as if a light breeze could blow me away and sever my roots from the earth.

This went on for the best part of a year, but after my daughter’s first Christmas, I made the decision to start dance lessons.

This wasn’t a sudden whim. I’d always wanted to have dance lessons, and went to a few ballroom dancing lessons with a couple of friends when I was a student – a rather frustrating experience due to a significant lack of men. I’d also had many years of ballet lessons from the age of 7 or 8, but I didn’t count that somehow. It wasn’t ballet I wanted to do. I wanted something less structured, less rigid, more sociable… I wanted to learn Salsa. WHY though?

Nothing, and I mean NOTHING, in my history should have given me any hope of being good at salsa.

I had horrible, awkward memories of school discos where I felt physically paralysed by pop music, and stood at the side of the room, envious of my friends who looked so relaxed and natural as they danced. I didn’t listen to pop music as a kid. I’d always assumed that was because I was being classically trained in three instruments, and it didn’t fit our family ‘ethic’ – but I’m not sure that was the reason. After all, when I became obsessed with A-ha in the ‘80s, my parents were perfectly accommodating, and allowed me to transform my bedroom into a ‘Morten Harket Grotto of Worship’, worthy of any dedicated stalker.

No, I just didn’t like pop music much. It didn’t make me want to dance. There was nothing about the tempo or style of the music that urged me to move my body. The only numbers I liked were the slow ones, because I could find an obliging boy and just sway with him until it was over.

I don’t know why the idea popped into my head that SALSA was going to be the dance for me. I didn’t even know anyone who danced salsa.

I found a local class, signed up and just did it anyway. Quite out of character for me, thinking about it now.

I’m glad I did though. From the very first few seconds when I heard the music for the warm up, I knew instinctively that I could do this. Something that had been asleep for my entire life just woke up.

I swiftly learned the steps and the routines. That was no particular surprise to me – I’ve always been quick to memorise sequences. But what surprised me was the joy that bubbled up from a profound and previously undiscovered well-spring inside me every time I danced. It’s difficult to explain – it’s a feeling of power, of happiness, a very primitive but pure gladness.

It was utterly addictive. 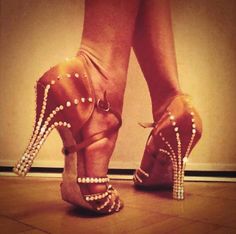 I started going twice a week whenever I could. So on the rare nights Hubby wasn’t out rehearsing, I’d don my skimpiest outfits, grab my dancing shoes and swan off to some nightclub. I attended every workshop going, I spent a lot of time with my dancing friends, I even went to a salsa weekender (a kind of holiday, with lots of lessons, parties and fancy dress), started learning other types of Latin dance (Bachata is my favourite), and I was actually at a dance master class on my daughter’s first birthday. I told myself she wouldn’t know the difference. (I’m a horrible mother. It’s OK. I know.)

There is no doubt that it was cathartic for me. Dancing made me feel alive and vital. It reconnected my feet with the ground. It helped me to forget that I’d felt like a ghost since my daughter’s birth. Spending the evenings laughing and talking with students (who thought I was also a student!) and cranking out those endorphins on the dance floor, really was the best therapy I could have chosen.

Slowly, the bruised and traumatised girl – the one who’d been expecting an easy second birth – began to recover and regain some control over her life.

Of course, there were many times when I wanted to go out but couldn’t, and I spent a lot of energy regretting my late initiation into the dance world. If only I had started before we had kids! If only I had appreciated how much spare time I had in those days! But I believe that dancing came into my life exactly when it was supposed to – when I needed it to.

These days, I’m lucky if I average 3 dances a year, but that’s OK. Someone once said to me, “Dancing will always be here, waiting for you,” … and it’s true. It doesn’t matter how much time you spend away or how rusty you feel when you step out on that dance floor, you soon discover the joy is still there.

That list I made – the one detailing why I couldn’t possibly start dance classes – it’s all irrelevant, and I’m glad I ignored it.  And yet, when I encourage others to try dancing – people who might want a form of exercise that doesn’t involve the gym, people who like Latin music, people who want to meet new friends or learn a new skill – most of them say the same thing: “But I can’t dance!”
​
Well, duh! You’re not supposed to be able to dance yet – that’s what the lessons are for.